ORCIA DOC: VOLCANIC WINES ARE THE REVELATION OF THIS DECADE

Paolo Vagaggini, Mr. Sangiovese, describes Orcia wines as minerally enriched thanks to the presence of the Amiata volcano; journalists and professionals unanimously agree to consider Orcia Doc as the Tuscan revelation of this decade. Donatella Cinelli Colombini, President of the Consortium, states: “Not only producers but also the whole territory of our denomination gain from our team work”.

“As it often happens in the greatest wine districts, it all starts with a volcano, the Amiata in this case, and surrounding each extinct volcano there is always a sea of fertile and highly mineral clay, so an ideal environment for viticulture”. 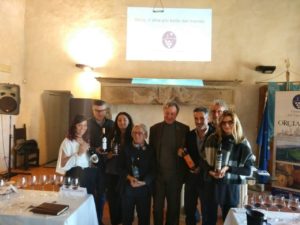 That is how the well-known enologist Paolo Vagaggini started to describe the features of Orcia Doc wines. The Consortium organized a full day dedicated to the promotion of Orcia wines at San Giovanni d’Asso Castle on Friday, November 9th. Producers played the leading role and introduced themselves to professionals, restaurateurs, sommeliers and wine bar owners and also to a group of journalists and tasters for the main Italian wine guides, who got to know a new side of these wines that have grown exponentially in just a  few years. This activity coincided with the program of events for the White Truffle Festival which takes place over the weekend.

“The Orcia Doc is born in one of the best wine districts of the world, from the high hills of southern Tuscany, between the areas of Brunello di Montalcino and Nobile di Montepulciano, a territory of great beauty, mostly recognized as a Unesco World Heritage site and which is scattered with small cities of art – Donatella Cinelli Colombini, President of the Consortium, said welcoming guests- It is hardly surprising that every year two thousand tourists and hikers come to this paradise of food and wine tourism. And if the competition with those two well-known neighboring wine names could seem worrisome, it has only created an incentive for Orcia,  which in just 18 years, from 14th February 2000 to today, has quickly moved towards high quality excellence, experimenting a lot”. 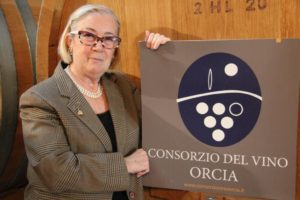 Orcia Doc, wines of the extinct volcano. The technical tasting was guided by the enologist Paolo Vagaggini who highlighted for the first time an important feature that distinguishes Orcia wines from those produced in the well-known neighboring appellation. “The Orcia river takes shape from the watershed and is surrounded by wild and magnificent nature; this river flows to the sea after 30 km, as the crow flies, and the river makes the climate mild thanks to salt air”, Vagaggini said.

“The Orcia river valley is protected by Monte Amiata (1738 m.s.l.) from cold winds that come from Siberia to the east and by Chianti and Montalcino mountains to the  north, so the climate is kept favorable”. According to Mr. Sangiovese, due to the compression of the volcano erupting galestro was formed, a mineral that drains and aerates the clay soil. This terroir is ideal for great wines and Orcia wines are expected to be greater and greater in the future. 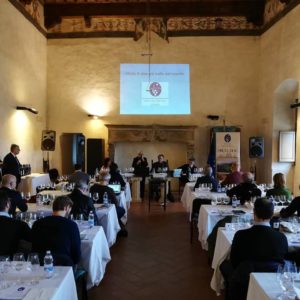 Orcia Doc: a denomination that is born in a Unesco World Heritage site. The grapes used to produce Orcia wines are mainly cultivated in Val d’Orcia, a territory that Unesco recognized as a World Heritage site some years ago. Therefore, one of the central issues frequently brought up by the Consortium and its producers is the safeguarding  of farming landscape, among the most beautiful in the world. Roughly 1.4 million tourists, among those 1 million are hikers, come to visit this area every year. There are many foreigners who own homes in Val d’Orcia, and not without reason,  65% of Orcia Doc wineries offer hospitality in their farmhouses or restaurants. Most of these accommodations are like outdoor museums, or “landscape museums” with unique and exquisite views.

Orcia Doc figures. Orcia DOC became official in February 2000 and its production area includes twelve municipalities to the south of Siena (Buonconvento, Castiglione d’Orcia, Pienza, Radicofani, San Quirico d’Orcia, Trequanda, as well as areas around Abbadia San Salvatore, Chianciano Terme, Montalcino, San Casciano dei Bagni, Sarteano e Torrita di Siena). The product regulations include: Orcia rosso (minimum 60% Sangiovese), and Orcia Sangiovese (minimum 90% Sangiovese). Both types can carry a “Riserva” mention in case of longer ageing in oak barrels and bottles, 24 months for Orcia Rosso and 30 months for Orcia Sangiovese. The denomination also produces other types: Orcia bianco, Orcia rosè and Vin Santo. To this date there are 153 hectares of vineyards but the total potential could be 400 hectares. The average production is roughly 240 thousand bottles which comes from 60 producers spread throughout the area. The Consortium  accounts for 40 of these wine makers and  since 2014 has been recognized with the Erga Omnes role and so it continues to promote and supervise all the Orcia Doc producers, even if they are not members. The Consortium is committed to promoting the denomination thanks to some activities online and offline like the signage in the area and the welcoming of journalists and buyers from all over the world. Some events organized by the consortium, like Orcia Wine Festival, have now become annual reference events.