The first stop of the journey is in the Sassodisole Winery, in Torrenieri  (Montalcino)

My journey of discovery of the”faces” of Orcia wine begins right in the heart of the territory of the UNESCO heritage site, the valley of the River Orcia. On the hills in the province of Siena in the north-east part of the municipality of Montalcino there is the “Sassodisole” estate 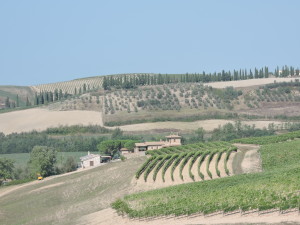 The visit to the winery could only be on a perfect sunny day! When I arrived I went at once into the winery where I found the workers bottling wine, the young   red Orcia of the previous vintage, 2015. This nectar comes from 5 hectares of vineyards cultivated around the property which also has another 40 hectares of olive groves, woods and fields for crops. The vines are all the local Sangiovese, grown between 280 and 320 meters asl  mainly facing south west. This winery has a peculiarity, being in the Brunello di Montalcino DOCG area it also produces this  prestigious wine as well as Rosso di Montalcino DOC.

Roberto Terzuoli is the young enterprising owner of the winery and I interviewed him (and his young son Tommaso) on a visit to the property.

Roberto talks about Sassodisole saying: “My father transmitted the passion for wine which was handed down to 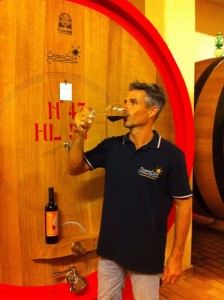 him by his father who bought the estate after the second world war. So this is the third generation to produce wine, I wonder whether Tommaso will continue in the future. So family tradition and passion drive us to follow the production of wine in all its aspects, from working in the vineyard and cellars to marketing.

Sassodisole produces Orcia with 100% Sangiovese, the indisputable king of this territory. Technology here is applied more in the vineyards than in the cellar to produce quality wines. At a distance all  the vineyards look alike but only the “technology” of the eye and hands of a man can decide what is necessary to the vines. If    I have to describe Orcia wine in two words I’d define it as pure and genuine. Because it is produced in an uncontaminated area and because the work behind the product is completely done by artisans. Ours is a small concern like many others in the territory but our advantage is the accurate manual selection 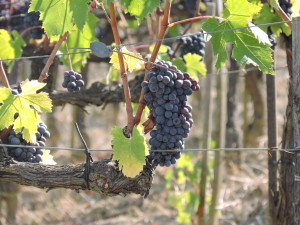 of the grapes and the ageing process in large oak barrels. The satisfaction obtained from this work is not only found in the various phases of the production but also in the end product, when after days of work you finally hold a bottle in your hands. The first wish is to taste a good glass of that Orcia doc with the awareness of how much fatigue and passion have gone into it! If I had to think of a genre of music to accompany this moment I’d imagine classical music, in particular Vivaldi’s “Four Seasons”, the natural cycle which is repeated every year, each season with its own character. Notwithstanding all this, a good glass of wine is great to taste in any period of the year.”

WATCH THE VIDEO OF SASSODISOLE WINERY