American Journalists in the discovery of Orcia Doc Wine

The Consortium is committed at present to the promotion abroad of local wines, with an incoming of American journalists 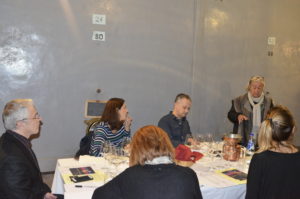 Donatella Cinelli Colombini, president of the Consortium comments “Our guests can meet personally the protagonists of the denomination, hear their stories and experience the emotions our wines evoke.”

The Consortium of Orcia Doc wine has the aim of making the territory known by showing some American journalists around until Sunday. They will have the chance to meet local producers, discover their wines but above all learn the philosophy of production which over the years has developed and is shared by the wine growers.”This operation is part of the numerous activities of promotion that our Consortium organizes during the year” explains Mrs. Cinelli Colombini. “We have decided to involve several influential American journalists because this market represents an important opportunity not only for our wine.” 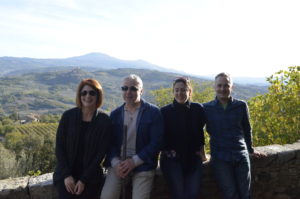 Among the guests of the Consortium there is Joel Mack from New York, an ambassador of Italian wine who writes for some important U.S.A. networks such as Vintrospective. Amy Zavatto is also from New York, an expert in telling about wine in magazines such as Wine Enthusiast and Hempton. She is the author and co-author of various publications among which the Renaissance Guide to Food and Wine.

From Philadelphia comes Joseph Roberts, the founder of 1WineDude.com., one of the most influential wine blogs in the U.S. and the first web site specifically dedicated to wine lovers. Finally there is the free lance journalist Michelle Williams from Dallas, who collaborates with numerous magazines dedicated to tourism and food and wine, as well as being among the 100 most influential wine bloggers in the USA and in  the top 10 wine influencers on Klout. 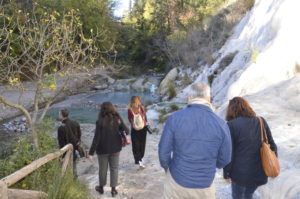 An intense program has been organized for them: the journalists will have the chance to visit some of the towns in the wine producing area and see not only the landscape but also its artistic and architectural features. They will be introduced to some of the specialties such as white truffles of the Crete Senesi, visit natural spas, the Francigena Route and some small museums as for example in Petroio. Not forgetting pecorino cheeses, extra virgin olive oil and ceramics. This incoming is part of the actions financed by OCM wine.

Orcia Doc: a denomination which preserves the landscape 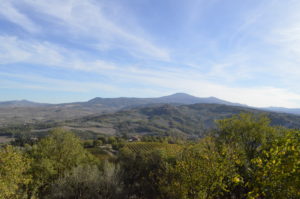 and welcomes the tourist.

The grapes producing Orcia wine are mainly grown in the Val d’Orcia territory which since 2004 has been listed as a UNESCO heritage site. So it is not purely casual that one of the main themes of the producers here is to preserve the agricultural landscape, one of the most beautiful in the world. Every year an average of 1.4 million tourists come to visit, and a million are excursionists. Many foreigners have bought houses in the area and 65% of the Orcia Doc wineries offer accommodation or have a restaurant. Most of these structures are like open air museums with panoramas which are unique. 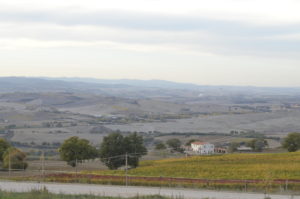 The Numbers of the Doc

Born in the year 2000 the Orcia Doc territory spreads mainly over 12 municipalities south of Siena (Buonconvento, Castiglione d’Orcia, Pienza, Radicofani, San Quirico d’Orcia, Trequanda and partly in the territories of Abbadia San Salvatore, Chianciano Terme, Montalcino, San Casciano dei Bagni, Sarteano and Torrita di Siena. At present there are 153 hectares of vineyards declared of a total of 400 hectares. In 2016 the production reached 240,000 bottles in the approx. 60 wineries in the territory, 40 of which are members of the Consortium which, as from 2014 supervises and promotes the activity of the producers of Orcia Doc wine. The Consorium deals with all the activities of promotion of the denomination, from Web sites, road signs in the area, to the incoming of journalists and buyers from all over the world. The Orcia Wine Festival is just one of the annual local events of reference.